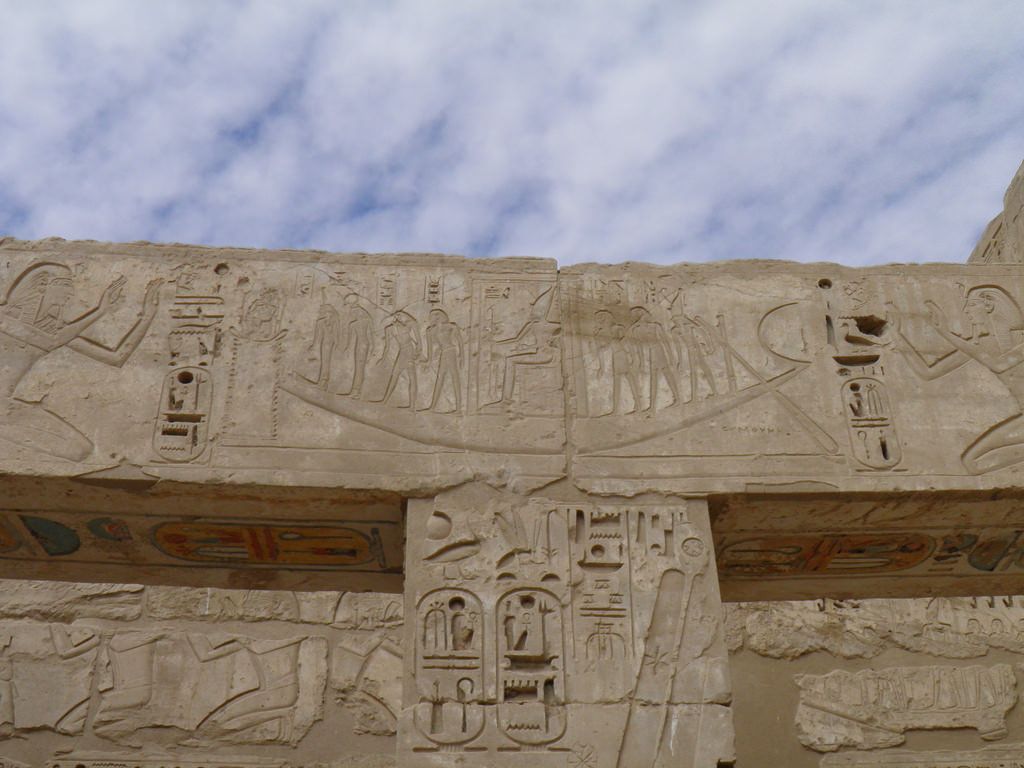 From Medinet Habu (Madinat Habu) not many tourists reach, a pity, because it is a place worth stopping for even a few hours. The huge area can be seen from the hill at the south-eastern corner of the temple. The entrance is on the eastern side of the complex.

Medinet Habu (po arabsku: Habu city) it's a huge complex (8 he has) stone and brick walls on the west bank of the Nile, located south of the Theban necropolis near the Valley of the Queens and Deir al-Madina (Deir el Medina), ok. 2 km from Ramesseum. Only the district of Amun in Karnak is larger than it. Medinet Habu is better preserved and comes from a slightly later period (ok. 1160 r. p.n.e.). It is worth stopping here not only because of the king's mortuary temple – "House of millions of years", but also to see the place, where Ramses III built a fortress and moved the administrative center from Thebes.

The contemporary entrance to the complex is at the eastern gate, not far from the Habou hotel.
In antiquity, the entire complex was surrounded by huge perimeter walls, fragments of which still rise in the lowlands. The entrance portal is located 80 m from the temple. In front of the eastern gate, the remains of a pylon from the Ptolemaic times are visible. On the west side of the complex, there was another fortified gate, destroyed in antiquity. Its appearance on the basis of the remains of foundations was reconstructed by archaeologists. The entrance leads near the remains of the port, two ruined buildings, probably houses of the gate guards. The high walls of the eastern gate cover the temple. Two towers – typical Egyptian defensive structures, they had originally po 22 m in height. The gate resembles defensive gates from Syria, hence its name is also Syrian – Migdol, referring to the wars of Ramesses III and Ramesses II. The towers have window openings, and one may have acted as a "pop-up window". The outer walls record the victories of Ramses III over the Libyans and the Sea Peoples. Rooms above the gate, where family scenes and images of dancers in flowing robes dominate, they could be the ruler's private apartments, in which he rested after religious ceremonies.
A large courtyard with the ruins of various buildings opens further.
On the right, north of the entrance, there is a small temple of Amun from the eighteenth dynasty (in maintenance), which, according to tradition, was built on a hill. The location is related to the first hill, which emerged from the currents of the Praocean and preceded the emergence of the creator god Amun-Re of the hermopolitan Ogdoada. The temple was built in the time of Hatshepsut, but its cartridges were replaced by those of Thotmez III.
During the time of the Amarna heresy, all the hieroglyphs containing the name of Amun were coined by Akhenaten's followers, but under Horemheb and Seti I they were restored.
Over the centuries, many buildings were built in the complex. To the left of the temple there are chapels of the Divine Worshipers from the Late Period (Adoratorek) Amona, also called the Divine Wives of Amun. The oldest one dates back to the times of Osorkon III (ok. 654 r. p.n.e.). Some of them were built during the XXV Dynasty, called Nubian or Kuszycka, when the kings of Nubia seized the throne. Their daughters and sisters were great priestesses of Amun and were titled Divine Wives of Amun and Divine Worshipers.
In the chapels of the Divine Adherents of Amun (Amenirdis I, Szepenupet II - daughters of Osorkon IV, Nitokris – daughter of Psametik I and Mehetenusechet) the best reliefs are in the first courtyard and the chapel of Amenirdis, King Shabaka's sisters, who is presented here as a ruler with all the attributes of pharaonic power.

Entrance to the mortuary temple of Ramesses III

To the west of the Migdol Gate and the buildings in the entrance courtyard begins the site of the mortuary temple of Ramses III.
It is the best preserved Theban building. The area of ​​the decorated walls is in total 7 thousand. m2. First Pylon (65 m wide and 27 m in height) leads to the first courtyard of the temple, actually to the House of the Million Years of King Ramses III, United in Eternity in the Reign of Amun, what its Egyptian name sounded like. The pylon has longitudinal furrows for masts with flags decorating the temple, who were called after the four goddesses: Nechbet, Tue, Izydy i Neftydy. Some of the reliefs are not only of artistic value, but also historical. The southern pylon tower is taller and better preserved than the northern one. Its surface is dominated by a huge relief with the king in the crown of Upper Egypt, making a ritual sacrifice of Asian captives before Re-Horachte and Amon-Re.
In the northern pylon tower, a similar scene repeats before Ptah and Amon-Re, this time with Nubian captives. God welcomes Ramses (crown of Lower Egypt) and gives him a curved sword of victory, symbol of courage in battle. Below, a row of small bound figures represent Egypt's defeated enemies. At the bottom of this row, on oval plates, the names of defeated enemies and peoples are written. Most often, these are the traditional names of enemies from the times of Thotmes III and Ramesses II, not peoples, with whom Ramses III fought. On both towers you can also see goddesses standing guard: on the south side of Isis and Nekhbeth, after the north – Nephthys and Wadget.
After passing the pylon, the first temple courtyard begins.
It adjoined the courtyard on the south side (currently in ruins) a small royal palace (access to the palace from the other side). Another "window of appearances" overlooked the first courtyard, where the king appeared to the most important government officials and priests. Hence, he bestowed offices and awarded the most distinguished commanders and dignitaries with gold necklaces.
The courtyard on the west side is closed by a second pylon with similar war scenes.
Once the second courtyard was surrounded on three sides by the pillars of Osiris with the king Osiris. The Copts turned the second courtyard into a church and destroyed part of the old interior.
They also removed most of the statues of Osiris, and they covered the reliefs of the porticoes with a thick layer of plaster. The plaster was removed during the restoration, revealing untouched reliefs, some of the statues were also reconstructed.
The scenes of Ramses' victories are still visible on the eastern side of the courtyard.

After passing the third pylon with beautiful painted cartouches of Ramses III on the bottom side of the door, you enter the inner part of the temple, which was destroyed during the earthquake in 27 r. p.n.e. In the hypostyle room, only they have survived 24 column bases, overturned during an earthquake and later used as building material. Behind the hypostyle hall, actually behind it, what's left of her, there are two smaller halls of worship in Montu, from which the side chambers depart. Further on is a second hypostyle hall with eight columns and two groups of side rooms. On the left is the tomb of Ramesses III, in which Thoth writes the king's name in the sacred tree of Heliopolis. On the other side, in the solar courtyard without a roof, there is an altar dedicated to Re-Horachte, with whom the king identified himself. Inside the third, in a small hypostyle hall there are statues of Ramses of Maat or Thoth.
Walking along the main axis of the temple, you reach three sanctuaries dedicated to the Amon Triad (in the middle), Mut (on the left) i Chonsu (on the right).
A gates covered with electrum led to this sanctuary, with gold and jewels. Behind the sanctuary of Amun, on the back wall, there were blind gates, with which Amon-Re communicated with eternity, as he became the divine figure of Ramses III.

The outer walls of the temple are covered with magnificent reliefs. These performances were to be watched by the faithful, not allowed to enter the tabernacle, which also served as a place of communication with the subjects.
It was also a model of a deity-centered universe, for whom only the king could provide everything, what's necessary. After leaving the temple, walk around the outer walls, to view scenes from historical events in the time of Ramesses III. In the western part of the temple wall, at the height of the sanctuary, there is a famous holiday list. The temple and palace complex was surrounded by lots of warehouses and other rooms.