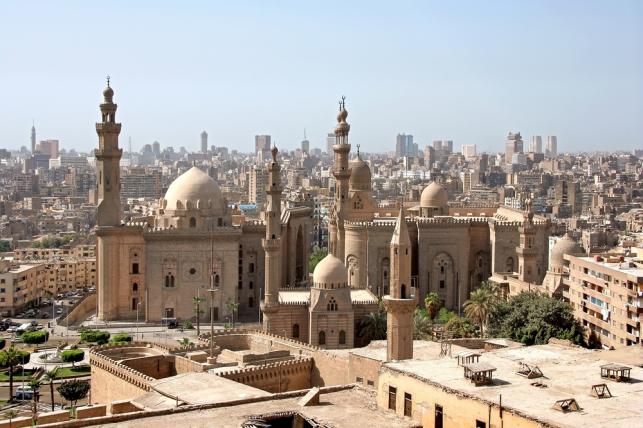 Cairo (po arabsku Al- Kahira) to the capital of Egypt, which for centuries has the honor of being the largest city on the African continent.

Now a metropolis bustling with life (almost 7 million inhabitants on 214 km2 of the area), formerly a small Roman fort founded at the beginning of our era. Cairo is situated in the Nile delta on the banks and many islands of the river, although initially it was further inland, north of the then capital of the state, Memphis. Over time, this small, a military settlement expanded and turned into a city inhabited mainly by Copts. In year 642 Arab troops captured the city and the fort, and from then on, Cairo began to develop at an extremely rapid pace.

How the metropolis was created?

The first mosque in Africa was soon established there, in year 973 the city became the capital of the Fatimid Caliphate, and in the following years, more mosques were built there, Al-Azhar university, and Cairo turned into a true center of science and philosophy. W 1517 year the city was captured by the Ottoman Empire, a ponad 200 years later (w 1798 year) briefly passed under the reign of Napoleon.

In the following years, the city continued to develop rapidly, the first railway line to Alexandria was built (w 1851r.) and the Suez Canal, which was supposed to facilitate contacts with Europe, because the number of Europeans living in Cairo and European tourists was increasing. Muhammad Ali, who ruled during this period, viceroy of Egypt, he was expanding the city, created new ones, rich neighborhoods designed by French architects, and during his reign the peasants began to mass-produce cotton, which in the following years led to the transformation of Egypt's economy into a monoculture and was the cause of the great economic boom.

In addition, during this period, the first tram line was opened in Cairo and, due to the influx of Europeans, the construction of cathedrals began. The city quickly and rapidly grew in size and population, i w 1937 years already lived in Cairo 1 312 000 people, what compared to 374 000 from year 1882 it best shows the power of this phenomenon.

Now Cairo is great, a bustling metropolis, which clearly shows a mixture of many cultures, that have influenced this city over the centuries. For millennia, the influences of European civilizations have crossed here, Asian, African and Middle East, and today the city harmoniously combines the traces of the oldest Egyptian culture with the achievements of the modern world. We can find here the remnants of the power of the old pharaohs, with the pyramids and the Sphinx at the head, as well as early Christian churches, magnificent mosques or felukas flowing lazily on the calm waters of the Nile.

Cairo is undoubtedly a city of many contrasts and many days are needed, just to get to know them a little. Although she does not sin with her beauty, it is characterized by such a wealth of remnants of ancient cultures and the extraordinary intensity of urban life 24 hours a day, that it should be a must-see for every tourist. However, you need to be prepared for an amazing level of noise and clutter, which prevails in almost every corner of the city, and the ubiquitous poverty and overpopulation, that make this city one big boiling cauldron.

Two sides of the city.

The oldest district of Cairo lies just east of the Nile and is characterized by dense buildings with narrow ones, crowded alleys. In the western part of the city, built only in the nineteenth century, open spaces predominate, wide avenues, greenery and magnificent villas. It is here that the most important buildings and offices are located, like the famous Cairo museum, and it is for sure the purest, the most neat and richest district of the city.

The center is Tahrir Square, from which the main street of the city of Talaat Harb departs, full of old colonial tenement houses, now often housing various hotels. The most impressive of these is the beautiful Marriott Hotel, being a magnificent colonial palace built on the occasion of the opening of the Suez Canal especially for visitors coming from Europe. It is located on the Zamalek Island, but because of the enormous luxury and draconian prices, few can afford an overnight stay at this hotel.

In general, there aren't many places worth seeing in this part of the city, and, above all, fascinating in a way deserves attention, amazing buzz in the streets. City Life around Taalat Harb, in the bazaars near Sayyida Zaynab or around Ramses Station (main railway station) it is bursting with unprecedented intensity and certainly deserves to be known. Especially, that in the evening Cairo looks festive and the human stream constantly flowing in the streets resembles nothing, co znamy z Europy.

Older district of Cairo, on the east bank of the Nile, it differs from the West as day and night. It's full of poverty and dirt, the streets look like sewers in places, and the unimaginable crowd can shock foreign tourists. Nevertheless, this district houses the most magnificent buildings, remnants of ancient cultures, mosques and a great citadel.

Houses located here, though mostly neglected, sometimes they are wonderfully carved and decorated, and sometimes it is enough to enter a random backyard, to discover the hidden beauty of the remnants of the former, rich world. In addition to numerous, great mosques, of which the Mosque of Muhammad Ali deserves special attention, Sultan Hasan Mosque and Ibn Tulun Mosque, which is the oldest (with 879 r n.e.), the largest and most harmonious Muslim monument in Cairo, it is also home to the oldest university in the world, Al-Azhar (built in 972 r.n.e). For a long time it was the center of the law and Koranic doctrine of the entire Islamic world, and still enjoys great respect today.

The nearby library counts 80 000 volumes, and the immense citadel impresses with the great, thick walls, which began to be built in 1178 year. In addition, it offers a wonderful view of the entire district and numerous mosques, so it is a great point to admire the panorama of the city.

When we come to Cairo with our own car, we must remember, that it is practically impossible to drive on the incredibly crowded local roads, and besides, they are also among the most dangerous in the world. The best way to get around the city is by public transport. Buses run frequently, but they're mostly full of people and it's not fun to ride, and trams now run only in the suburbs, e.g.. w Heliopolis.

As for buses, their network is quite well developed and they can be reached practically everywhere. However, because this means of communication is used by an enormous number of people, you have to reckon with that, że część pasażerów nie mieści się zwykle do środka i możemy zostać zmuszeni do odbywania podróży wisząc z boku pojazdu lub czepiając się jego tylnych drzwi… Due to the incredible crowd at the bus entrance, getting inside is sometimes almost a miracle, and as if that were not enough, these vehicles have a habit of picking up passengers without stopping to the end.

Tickets are inexpensive and can be purchased from a salesman who squeezed through the crowd while driving – their cost is approx. 25 pt. Getting off is similar to getting on, and we don't really have a chance to wait, until the bus stops graciously to let us out. We have to stand close to the door at the right moment, when we want to get off, just jump out into the street.

And the metro, the only one in Africa, is quite a good solution, when we want to travel longer distances. It largely leads on the surface of the earth, ma 62 km long and should be further expanded soon.