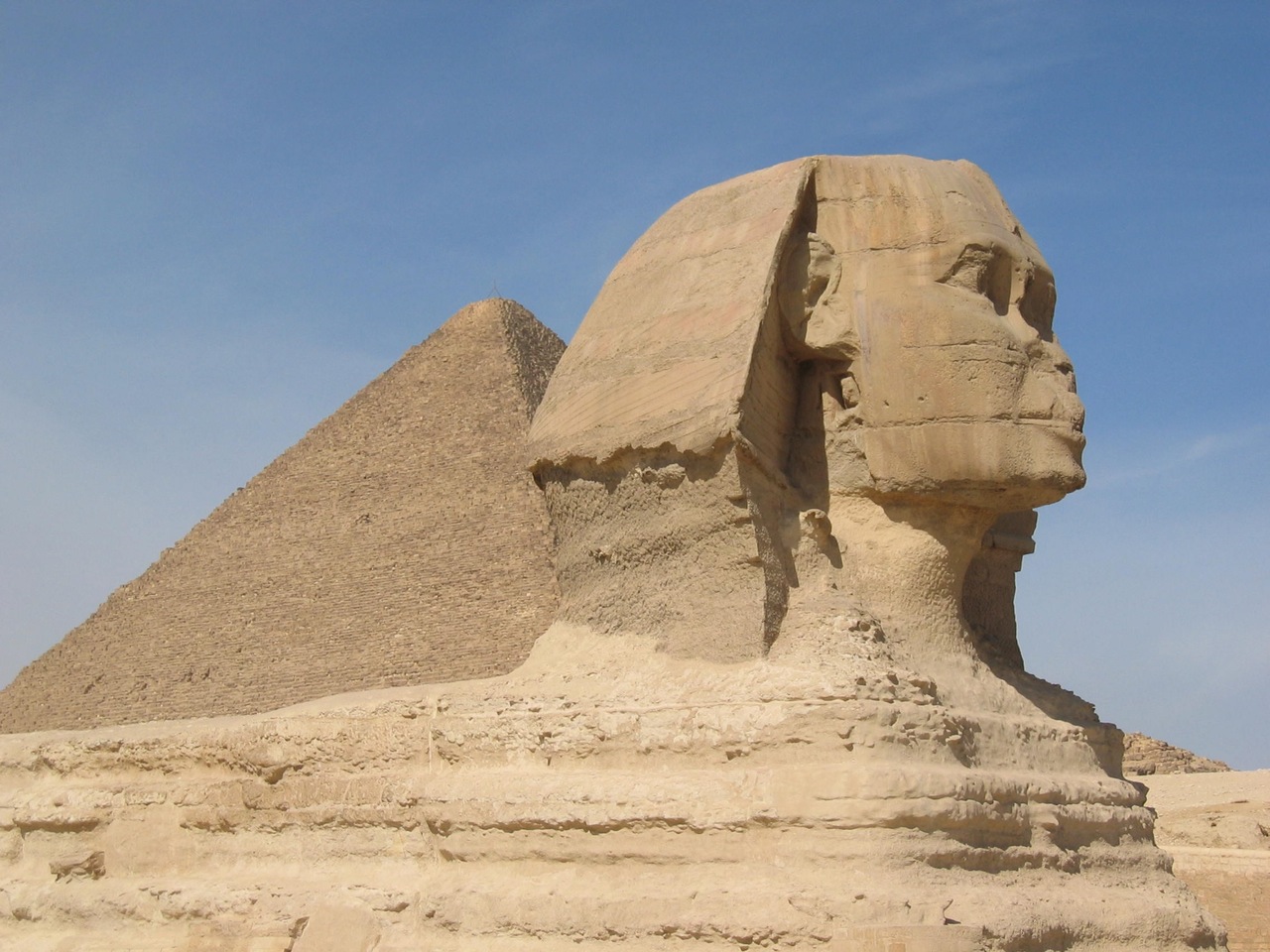 Sphinx, figure of a lying lion with a human head, he was a symbol of royal power in ancient Egypt. Although depictions of this type of creatures are not rare in the world and have occurred, for example, in. in Greek or Sumerian mythology, it is the Egyptian sphinxes that have one important feature – lack of wings.

The most famous sphinx in the land of the pharaohs is undoubtedly the Great Sphinx lying at the foot of the Giza pyramids, which the Egyptians talk about Abu Hol, which means Father of Fear. This colossus measures as much as 57 meters in length and 20 meters high and faces east, that is, towards the Nile, and there is a little temple at his paws.

It is not known exactly, when this huge Egyptian monument was built, and scientists give dates from 2600 year BCE. (the most popular version) to even 13 thousand years BC. It is clear, however, how it was built – the sculpture was directly cut into a large block of rock, as a result, the sphinx was placed in a niche of rock and the ground level was high above it. Over the past several thousand years, the Sphinx has been buried many times, and its body has been covered with sand for over three thousand years. Only the big head was sticking out, which was immortalized in photos from the last century.

Currently, there is a largely unanimous opinion, that the Great Sphinx of Giza dates from approx 2500 r. p.n.e. and together with the pyramids it was built during the reign of Pharaoh Khafre (Chefrena) from the Fourth Dynasty, and his face is that of Pharaoh himself. It is, however, puzzling (as more and more independent researchers pay attention), that the pyramids of earlier and later dynasties are falling apart, and those from the fourth, built in a similar period as the Sphinx, have survived to this day in good condition. In fact, there is no evidence whatsoever, who built them, and assigning them to various successive rulers is illusory and groundless.

In addition, modern engineers believe, that today it would be practically impossible to erect such structures, let alone thousands of years ago, and unanswered questions keep multiplying. So anyway, that officially it is said that the Sphinx and the pyramids originated from approx. 2500-2600 years before our era, it is more and more voices making bold theses, according to which these buildings can be even several thousand years old!

W 1991 r. doctor Robert Schoch, geologist at Boston University, published evidence to support the nineteenth-century thesis, according to which the Sphinx was created in 7000-5000 r. p.n.e. According to him, the sculpture was created in stages and the torso of the statue comes from this period. Its body was first formed, rear section at the latest, and many years have passed from the start of construction to its completion. So although today it is commonly believed, that the Sphinx was created as the guardian of the pyramids, seems, that it was built many centuries before them.

also, over the millennia, it has been eroded by groundwater many times, it was restored and sanded many times. Researchers note the disproportion between a long body and a small head, which in addition was preserved in a much better condition than the rest of the lion's body. This clearly suggests this, that the current head of the Sphinx is not original and originally looked completely different, and through the ages it has stayed, maybe even a few times, rebuilt. It was so easy in addition, that for many years the statue was almost completely covered with sand above which only the head protruded. So it was easy to do, without building huge scaffolds, give the head any shape.

Currently, the face of the Sphinx is considered to be the image of Pharaoh Khafre, but most likely in the time of this ruler the head of the statue had long been ready and, so does the rest of the body, badly damaged. Pharaoh could therefore choose to make her image his own, which would explain its smaller size and better appearance. It is just as possible, that the face of the Sphinx represents someone else entirely, as according to some researchers and New York court expert Frank Domingo the facial features of the Sphinx are definitely negroid (African) and very different from the features of the Egyptian pharaoh.

Sahara desert in streams of rain

Most importantly, though, modern research seems to confirm this remarkable thesis, According to which the erosion of the statue was mainly caused by non-desert winds, but water! Other nearby monuments were damaged by sand and wind, while on the Sphinx, traces of water erosion are visible, which could have happened in between 12000 i 3000 r. p.n.e.

It was then that the last floods and heavy rainfall in ancient Egypt took place. The most cautious dating of the great rains dates back 5-7 thousand. years BC, when it was the neolithic rainy age. Some, however, believe, that there was not enough water to destroy the body of the Sphinx so far, and more likely, that the so-called rainfall had its share in it. the first rainy era, prevailing in today's Egypt 10 -15 thousand. years before our era.

So the only thing that seems to be almost certain is this, that the Sphinx bears traces of thousands of years of rains and is many more years old than the oldest of the pyramids. This is confirmed by numerous geologists from around the world and seismographic surveys.

Egyptologist – amator J.A. West, together with the well-known seismologist Thomas Dobecki, analyzed the traces of erosion near the Sphinx and tried to determine their age. Though they failed to give a specific answer as to the age of the statue, however, they judged it, that the front of the monument is older than the back by at least 3 thousands of years. This confirms the thesis, that the head of the Sphinx has been reworked many times from some older statue.

Currently, Schoch is waiting for permission from the Egyptian government to collect stone samples for radioisotope testing with chlorine 36, and maybe this study will finally give an answer as to the age of the colossus.