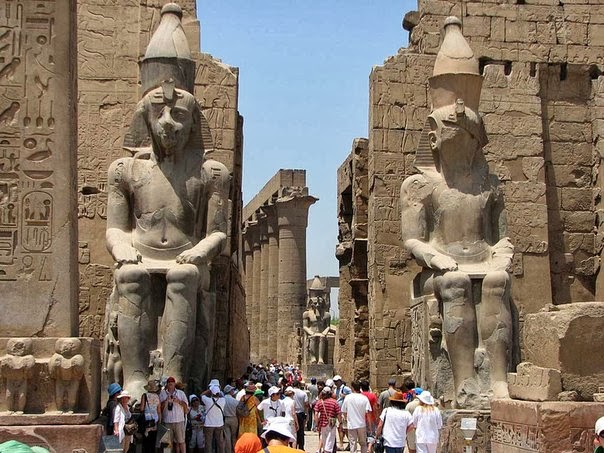 Luxor is a city in southern Egypt on the right bank of the Nile. Its name in Arabic means “city ​​of palaces”, and whoever was in it will not deny it, that it perfectly reflects the nature of this place.

Formerly Luxor was the southern part of one of the greatest ancient capitals of Egypt, Teb, which at the peak of their development had up to a million inhabitants. Now it is separated from the northern part by a canal, called Karnak, and the Nile further divides it into eastern and western parts, each of which houses wonderful remnants of the old world.

On the east bank of the Nile we find a beautiful Luxor temple, on the west we will see the City of the Dead or the Valley of the Kings. It is the largest concentration of temples and tombs in Egypt, it's called the world's largest open-air museum for a reason. There are countless breathtaking statues and crypts here, it is here that the rulers were most often buried together with their treasures.

Kings Valley, discovered only at the beginning of the 20th century, it is full of vast labyrinths and hidden chambers, which were intended to mislead potential looters and save the riches accumulated in the proper tomb chambers. The most famous burial place is Tutankhamen's tomb, who is the only survivor to our times not plundered by thieves, perhaps because of the curse, which supposedly weighed on him…

As with other ancient Egyptian cities, nor did Luxor's heyday last forever. For centuries it lay forgotten by people, depopulated and abandoned, and for a long time no one remembered the wonders he was hiding. Some of the ancient monuments have been destroyed or transformed into stables or granaries, and it was only in the modern era that people began to rediscover the beauty and secrets of ancient magnificent buildings.

Now tourists from all over the world come to Luxor, to see the temples of Edfu, Kom Ombo, The Temple of Queen Hatshepsut or one of the many outdoor shows by the temples, of which the most recommendable and most impressive is the one in the Luxor Temple. Interesting facts can be added, that the action of the popular computer game Serious Sam I takes place in an Egyptian setting and begins in Luxor at the Temple of Hatshepsut.