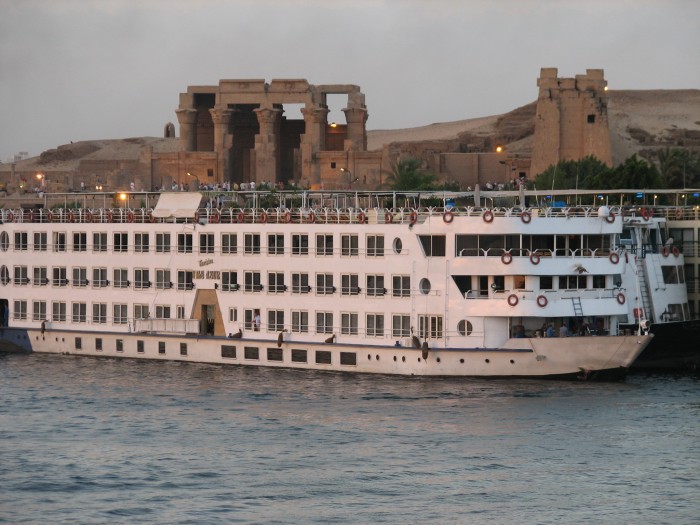 Cruises on the Nile have been in vogue since the 19th century. Initially, the owners of the ships were large international tourist concerns, and Egypt did not get a cent of their profits. To counteract it, in years 90. XX w. a special program, commonly known as "development dollar", was implemented”, according to which tourists on the Nile voluntarily taxed themselves on the dollar. The collected money was donated to schools, roads and waterworks in the most neglected towns. Slowly, river tourism began to pass into the hands of the Egyptians, and it would seem, that the era of prosperity will come. Today, the most famous and luxurious ships still belong to international hotel chains. When it is difficult to move freely in Egypt, a cruise on the Nile becomes one of the few opportunities to look at this country not only as a place of ancient pyramids and temple ruins. From the deck of a cruise ship, you can observe the changing nature and everyday life of people, which remained largely the same, as in the time of the pharaohs. It's a meeting with clay villages, where life takes place on the river bank. You can see the children playing in the water, women washing and washing pots, wearing pitchers of water on their heads, buffaloes lounging in the riverside mud, fishermen catching fish, palm groves, cotton fields, sugarcane, vegetables. You can also see tons of garbage stored on the shores, which slowly slide into the water and drift with the current. This is Egypt too.

The cruises can be made as they are 7-day trips (only from Luxor) or shorter 5- or 3-day – usually from both ports. During this trip, nights are spent on board, during the day, you go or visit individual monuments after you land. In the Luxor-Aswan variant, you can count on a stop at Luxor, to visit Luxor, Karnak and Western Thebes, and then in Edfu (temple of Horus). After an obligatory stop at the Esna lock, the ship sails to Kom Ombo, where you go ashore. Then they either go back to Cairo, or to holiday resorts. Individual ships differ in standard.

Felucca rides (or a small motor vessel) it is a must for your stay in Aswan. Some organize further trips, but most are limited to cruises to the nearest islands (Elefantyna, Kitchener's Island, Sehel), to the west bank or to the vicinity of Cataract I.

And the Cataract and the island of Sehel

Some travel agencies combine a trip to a Nubian village with a visit to the island of Sehel (4 km south of Aswan) and the vicinity of the First Cataract. The price of such a trip then increases to 30-35 USD. The official price for a three-hour cruise on a felucca is 70-100 EGP. Always remember to have drinking water and a hat.
On the island of Sehel, the rocks are so hot at noon, that they almost burn.
With a strong wind behind, it takes about half an hour to sail there, during the day, when it's not blowing – sometimes longer. The official price of such a trip (only to the island of Sehel) is approx. 50 EGP.
There are two hills decorated over Sehel 250 inscriptions from the Middle Kingdom and Ptolemaic times. They are scratched rather than carved into hard granite. Most of the Egyptian expeditions to Nubia stopped at Cataract I and made sacrifices for a successful return. Similarly, our return trips were engraved with inscriptions in honor of the goddess Anuket, Lady of the Island, consort of Lord Cataract -Chnum. One of the most famous inscriptions has been preserved on the eastern hill, Ptolemaic Hunger Stele (no 81), probably a copy of an older stele. The text engraved on the stone refers to the reign of Pharaoh Djoser and tells about the seven-year period of famine during the Third Dynasty.
From the hill there is a wonderful view of the entire Cataract, with the swift streams of the river squeezing between the granite sheets. Before the construction of the Aswan Dam, the water in the cataract was foaming, creating a terrifying obstacle for river travelers.
In ancient times, the cataract was considered the source of the Nile, with which Khnum poured water over Egypt and to the south – to Nubia. The Egyptians imagined the springs as an underground cave, where the river deity resided.